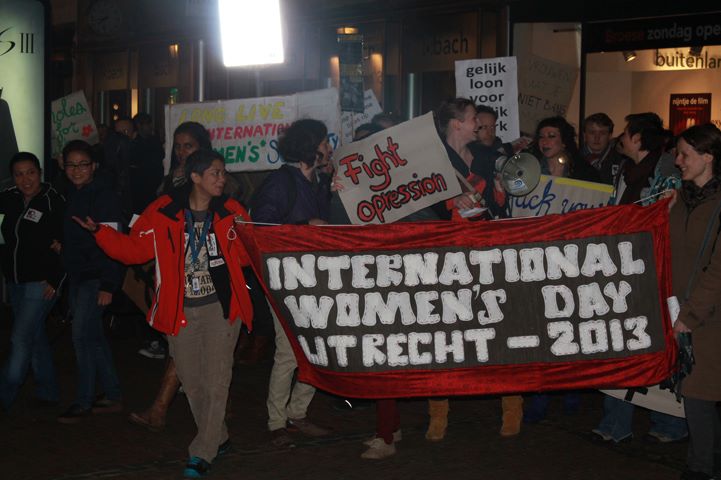 Raise your voice! Your body, your choice!

Born out of the Socialist movement, the 8th of March has traditionally been the day to celebrate women, the day to especially address and fight for women’s rights and recognition of the (mostly unpaid) work we do as mothers and caretakers. Every year demonstrations and events to make struggles of women visible are organized worldwide.

That’s great and we support it because gendered violence against women is always an issue, but for us this is not enough! Yes, women’s bodies are controlled and often violated (anti-abortion laws, sexualized violence, objectification, unequal payments, etc.) but not just women are made to have less choices!

When people say woman, many think about a person assigned as a female at birth living happily ever after as: (cis) female, white (not experiencing racism), abled-bodied, heterosexual or normsexual (non kinky, heteronormative, sexual, monogamous), thin, as well as being privileged in other ways.

This 8th of March we actively recognize those who have often been left out, silenced or willfully ignored. We want to critically address who is included in our queerfeminist struggles.

When we say my body, my choice, we include in our thinking the migrant bodies, who are controlled by migration laws, border- regimes, at times imprisoned in detention centers or threatened by deportation.

We include trans* people who need to access hormones, health care or body- modifications and who are asked to prove their ‘problem’ by stating every little detail of their past and present life.

We include gender non-conforming people who might not fit into the gender- binary, and not be understood as ‘male’ or ‘female’, who face harassment and other kinds of violence in the streets, which takes away their choices of expressing themselves.

When we say my body my choice we include in our thinking women or/and queers of colour who experience racism or harassment because their bodies are often racialized and sexualized.

We include people who are labeled ‘disabled’ and for whom choices around their daily lives are made or who don’t have access to certain places because their abilities are not taken into account.

And we include sex-workers’ struggles against the often moralizing discourses around their bodies.

For us, all of these issues are feminist issues that have to be addressed on a queerfeminist demonstration like this one!

So we, as all these bodies and not all of us ‘women’, at this 8th of March event, shout out loud and together: OUR BODIES OUR CHOICES! TAKE YOUR LAWS AND YOUR HANDS OFF OUR BODIES AND OUR CHOICES!

Let’s embrace our bodies & our choices today and every day! Let’s fight next to each other against oppression and all the other negativity that is put on our differing bodie

This entry was posted in events, General. Bookmark the permalink.